Let’s draw up a kitten and tell a story

1.10 dropped to stable, oh my, everyone was so excited because it brought back the start of broken bones, something we didn’t think we’d see ever again in DayZ and everyone was excited.

TheRunningManZ couldn’t play on the update day, but he started his stream on the next day just as DayZ announced a hotfix was going to be released

How patches work is that if someone starts up steam they will be given the patch but they won’t be able to play on a server until the server is also patched, this is called version alignment. If someone is already in the server they can stay in unless they go back to steam usually. If you’re in a server you can keep playing

As people who know every blade of grass and nut and bolt in DayZ we watched the update page and saw the patch go live, now we’re on a timeline!

People will now be getting the client update but they won’t be able to join the server because the server isn’t updated. But that doesn’t actually generally matter because we’re at the start of the population upramp for the evening. The servers are full of people playing and TheRunningManZ is having constant interactions and adventures. It’s even at a point most of the time that a server restart would kill him because he’s so on the edge any kind of rollback will take away a knife or some food or break a story

We’re also in a DM group of about 20 people from across the community who raise interesting tweets from DayZ or general goings on from around the place DVS. They’re a AEW of DayZ and collectively know more about DayZ than the Devs in all probability

So because of 2500 people and because the servers are full we let it all run on. There’s a scheduled restart at 5pm and that’s not far away. We slowly watch the server population drop away as people finish their game but new people can’t join because they have the new version and the server is misaligned, all the while balancing whether to pull the plug (and kill TheRunningManZ and probably a few other innocents who are just having fun) or wait it out to the 5pm restart and put the patch in then 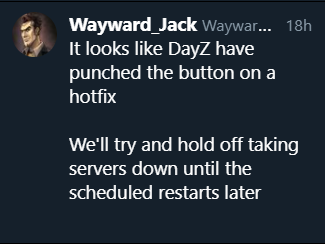 We’re seeing some of our other servers dropping away now so we’re patching those as feels appropriate, it means 2 restarts but numbers are low and who in DayZ isn’t used to a restart?

At 4:55pm TheRunningManZ AFKs and we see a 5 minute window to take the server down, do the update and then let the restart kick the server back up at the 5pm, it’s not ideal but it’s better than taking it down again after the restart which can have some half start memory worries

In the last 20 minutes there’s been someone in chat moaning about not being able to play the server. We’ve tried to calm him down but we can’t give the server away because that’s a rule of the channel. Here he is, we’ll remove his name because we’re nice guys:

We can’t say: ‘We’re not taking the server down to update it because TheRunningManZ is streaming from it to 2500 people and the server has only dropped to about 60 people on it anyway’ but we’d’ve liked to. People tried to calm him down in chat

At 4:55:06 he DMs Spaggie on Twitch. So remember, we’re just about to hit the offline button after about 2 hours of updating 4 other servers and trying to elegantly time this for about 2600 people (and more if you count the YT content and the VoD views which, as you can see are at 28,000 at the moment 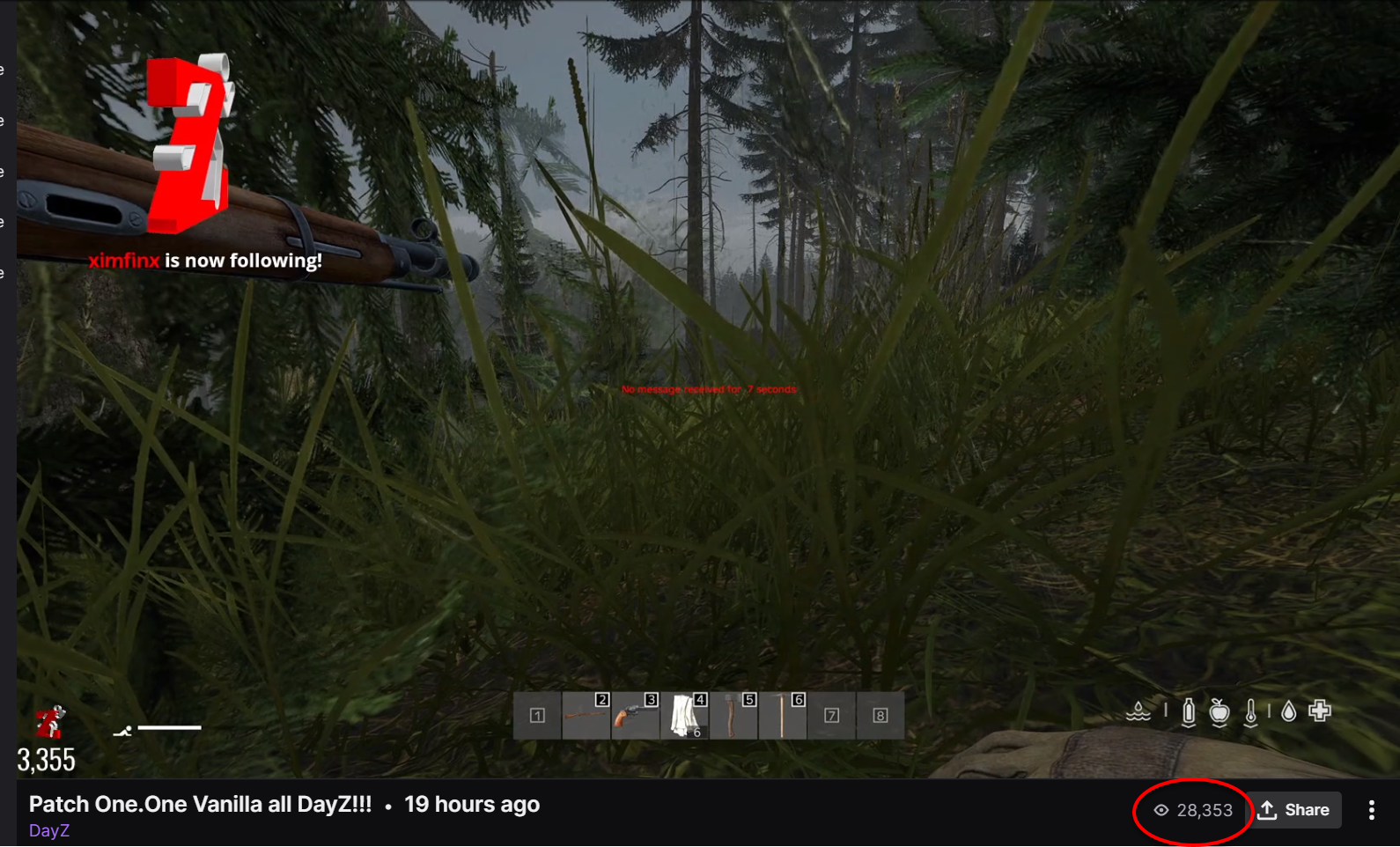 The streamer even thanked the admins when he returned and without prompting knew what was happening: https://www.twitch.tv/videos/809391766 it’s at 3 hours 37 minutes in if you’d like to look at how things work.

And we sat for 90 seconds after the update was pushed onto the server for the scheduled restart to back up. If we’d not been getting DM’d we’d have probably left it tighter, at our GSP they’re on some massive Tier 1 backbones and updating the server is merely pressing this button when it’s ‘just’ a hotfix. Seconds.

So now we’re not only coping with patching a server infront of an audience, we’re also coping with someone thinking that telling us about hlsw which is an inelegant server updater program is helping while stamping his feet because HE can’t play on the server

It’s this kind of crap that

And then you got to a Discord and get an earful about how everyone elses server is better and how someone did a survey and everyone agrees (I’d take a guess that the people whinging don’t have a graphics card / system able to handle the ‘not quite vanilla’ view distances we run, but that’s on them)

TheRunningManZ is not the only streamer that comes to our servers for the Vanilla experience on any given evening there’s a few, all carrying thair communities with them. We carry that responsibility and the responsibility of everyone in our servers with care

We’re not alone in this, every server owner, official and community is getting day in and day out grinding whinging. It won’t end well.